DEEPIKA AND RANVEER CAMPAIGNING FOR BJP ? IS IT TRUE ?

A picture of newly married Bollywood couple Deepika Padukone and Ranveer Singh campaigning for BJP got viral. The couple can be seen supporting BJP scarves which read as “ Vote for BJP N Modi “. 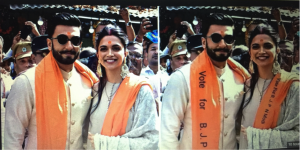 The caption shared with the image as, “ कमल का बटन दबाकर देश की तरक्की में भागीदार बनें’ (Contribute to the country’s development, press the Lotus button)“, suggests that the duo were campaigning for the ruling dispensation in the ongoing Lok Sabha polls.

And the truth is when you look closer at the lettering of the scarfs that reads ‘vote for BJP N Modi ‘ is enough to see that the photo is photoshopped. The research revealed that the image was originally clicked in November last year when the couple had visited the Siddhi Vinayak Mandir in Mumbai.

A side by side comparison of the original photo confirms the same : 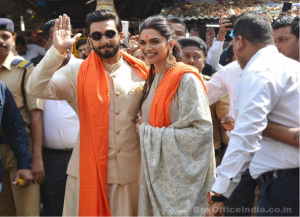 The couple was accompanied by Deepika’s father Prakash as well as sister Anisha Padukone and Ranveer’s parents, Jugjeet Singh and Anju.