LOOK WHO IS MAKING HIS DEBUT BY MR. BHANSHALI

One of the most respected directors of India Mr. Sanjay Leela Bhansali is known for giving the best cinema experience to all of us. He has gifted many awesome actors to our Bollywood from his tremendous films. According to the latest hot news, it is confirmed that Mr. Bhansali is going to launch Jackey Jaffrey’s son Meezaaan Jaffrey in his next production.

In his production, he going to launch new talent, someone he has seen growth and has also personally been involved in preparing him for Bollywood.

Reports have suggested that Sanjay Leela will launch Meezaan in his forthcoming film which will be directed by Mangesh Hadawale. Meezaan, himself confirms this news in an interview and said that being an actor was not his childhood dream but somehow Sanjay sir gave me the dream as well as also made it real by launching me. 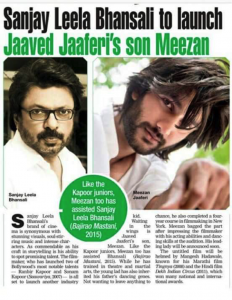 Prerna Singh, the CEO of Bhanshali Productions, said that Meezan has been signed for 3 films. But there is no confirmation yet who will be playing the main lead lady opposite him.

We really wish you all the luck and success Meezaan!