“Malti a character that will stay with me forever”-Deepika #chhapaak

Deepika Padukone has revealed her first look from Meghna Gulzar
directorial Chhapaak, which is based on the story of acid attack survivor
Laxmi Agarwal.
“A character that will stay with me forever…#Malti. Shoot begins today!
#Chhapaak. Releasing-10th January, 2020,” she wrote on Instagram.

After getting married, Ranveer Singh already got back to work and
his two of films Gully Boy and Simmba released, Deepika is also
making a comeback with Chhapaak.

Meghna also tweeted the photo of Deepika in character and wrote, “She
is courage. She is hope. She is @deepikapadukone as #Malti
in #Chhapaak. Shoot begins today. Releasing on 10th January, 2020.”

Helmed by Meghna Gulzar, Chhapaak also stars Vikrant Massey in an
important role. With Chhapaak, Deepika Padukone will be also be turning a
producer. The film is about the undying human spirit and complete
determination. The main protagonist, Malti aka Deepika will be seen as a
woman who goes through serious trials and tribulations and it will showcase
the journey of her coming out as victorious in the end. 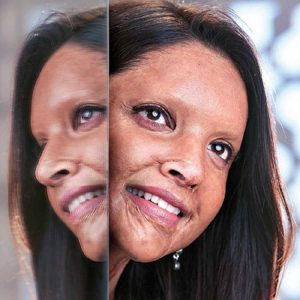 Deepika, who also turns a producer with Chhapaak, is extremely excited to
work with Meghna and to play the role of Laxmi Agarwal. A while back in an
interview with HT Laxmi said, “I am so happy that Deepika is playing the role. I
have no right to judge her. How can I judge someone for something which I
can’t do. She has played wonderful characters on screen and I believe she will
give her best. I want to thank Deepika ji, Meghna ji and the entire team who
will be working together on the film.”

Chhapaak’s release date is also out along with the first look and it will release
on January 10, 2020.