Coachman Chases and Stops out-of-control Horse with carriage and falls under it.

This thrilling and disturbing incident took place in Pune on a busy road, It was a 400 Metre Chase involving an out of control horse carriage and three men on Motorcycle ended it with sparks and Minor Injuries near the Koregaon Park Junction around 8:30 in the evening.

This is an entire movie in less than a minute. Amazing #Pune pic.twitter.com/yPZC9iMMS8

The video above states the incident recorded by a person on the road. It was a pair of horses drawing a carriage, speeding down at Bund Garden Bridge with three men on a motorcycle trying to tackle the horses getting closer to the carriage, anyhow due to disbalance one fell and came under the wheels of the carriage. The Horses were at total out of control and the situation seemed to be uncontrollable, the incident got captured by a citizen and went viral on social media, which states that the person trying to tackle the horse and managed to grab the harness of one horse, forcing it to slow down and take halt, got under the wheels of the carriage and went through minor injuries.

It all went like a movie story, Coachman tackling the horses and then  fell off the motorcycle to tackle the situation and came under the wheels of the carriage,

In consideration of the reports the person injured named, Jitendra Kadam suffered minor injuries in his abdomen and hands. 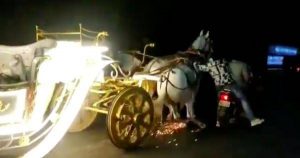 Though there was no other damage and the condition of the horses still remains unknown, whereby the police states to investigate this incident and file a complaint against the horse and the carriage owner.

Whereas the coachman Kadam Explained how this incident happened, as being the coachman the leash of the horses got snipped and they started racing, though when this happened he jumped off the carriage and took the help of the people on a motorcycle to take control of the situation.