The centuries-old Ayodhya verdict case put to an end. The Ayodhya verdict has been the most popular case for years as Ayodhya was the Birth Place of Lord Rama and the location of Babri Masjid. This Ayodhya dispute has always taken up as a socio-religious debate and remained as a conflict between the ‘Hindus and Muslims’.

And has always been a critical issue to criticize the other.

‘‘WE ARE ONE OF THE SAME MANKIND”.

We might not take it as distress to our religion and social beliefs. We unite and create a country rather than being into parts. Here in this scenario, this case has been enraged in regards of the two religions that oppose each other to get the land in order to construct their frame of religion. 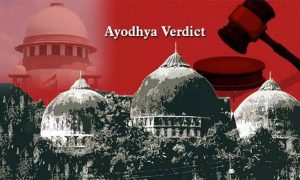 The Babri Masjid was destroyed years ago during a political rally and then this case was taken over to the Allahabad Court. Though then judgment was passed to distribute the land into different sections but then it wasn’t taken over and now after 9 years the final judgment passed over headed by the chief justice Ranjan Gogoi, he vacated the previous order and ruled that the land belongs to the government.

Further ordered that the land be handed over to build the Hindu Temple and ordered the government to provide Sunni Waqf board 5acre land to build the Mosque.

Though after this also we are all people of the same motherland and there are various contributions on this land, we are all humans and hereafter the settlement of this case we might not put in the Caste System and fight over for the land as is now provided for the construction of ‘Ram Mandir’. And the other board has been provided with a different land. We should take it on the basis of humanity and accept it as it is.

No business can take over the case though it can only lead to disruptions of one or the other. And both the sections have been provided with lands to build the temple and mosque to grace up their religion. It might be a criticizing event for some and a rejoice for some, but we might not forget that we are all humans and at time of this phase we should not forget our ethics and morals.